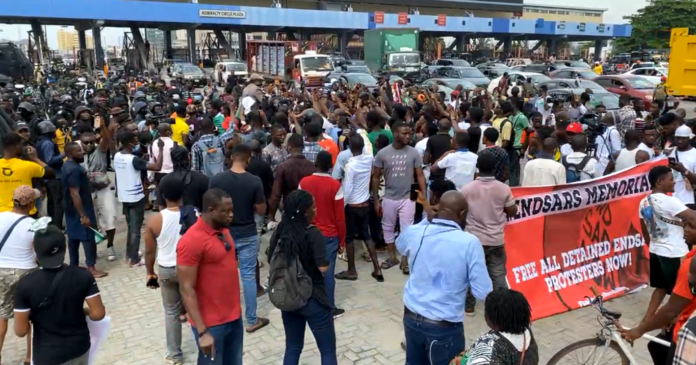 Expectations have been heightened today, October 20, 2021 as the memorial of #EndSARS victims is being held.

EndSARS is one of three event that re-echoed across the world last year, besides COVID-19 and #BlackLivesMatter.

Some Nigerians including celebrities decided to embark on a car protest at the Lekki Toll gates to speak against the attempt by the security forces to repeat the violence that caused many deaths and injuries.

Protestors who couldn’t make it to the venue have taken to social media, especially Twitter, to speak on what they term as police brutality among other factors they believe are suppressing the future of the Nigerian youth.

Protesters in Abuja who are far away from Lekki toll gate, which was the epicentre of the protest last year, converged at the Unity Fountain where they sang songs of freedom to support the cause.

Others with no cars also gathered the courage, through their rights to demonstrate, to join forces with citizens, who share the same view with them.

Meanwhile, about six people have been arrested when they stepped out to mark the anniversary, per BBC Pidgin report.

It has been announced by the Lagos governor that there will be curfew by sunset to allow the military men at Lekki Toll Gate to disperse the protesteros.

Nonetheless, celebrities Mr Macaroni and musician MC Falz are leading the #EndSARSMemorial charge, which is expected to top the trends on October 20, 2021.

Check out some of the videos of the ongoing protest in Nigeria below:

Full speech of President Muhammadu Buhari on the #EndSARS protest