Flagbearer of the All People’s Party, Hassan Ayariga, has advised presidential aspirants disqualified in the build-up to the December 7 polls.

Five out of the 17 aspirants, who submitted their nomination forms with the hope of contesting the polls, have been disqualified.

Following the EC’s Chairperson, Jean Mensa’s announcement on Monday, October 19, 2020, some of the aggrieved persons have threatened to sue.

However, Mr Ayariga, speaking on Accra-based TV3, noted there was no need for that as someone who suffered the same fate in 2016.

Though he shared their pain, he was of the view that it is a waste of time. 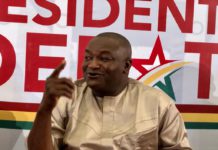