Actress and socialite, Efia Odo, has touched the nerves of comedian DKB and some Christians for challenging the scriptures.

According to her, God supports slavery as is documented in Exodus that a master can punish a slave, so far as he or she does not die.

When cautioned not to joke with issues concerning God and the word of God, she insisted the Bible is simply the word of man.

Her comments attracted reactions from comedian DKB who said humans no longer lived by the Old Testament, but rather live in grace in the New Testament.

He warned Efia Odo to repent from her “pioto bonanza and indecent exposure” or she would burn to death.

Efia Odo raised eyebrows over DKB’s comment and called him a religious slave and clout chaser.

She said ‘dumb’ DKB does not follow what is written in the Bible yet he defends it with every zeal in his body.

Their exchange ended with Efia Odo still maintaining her stance that religion is a means of oppression and mental slavery by colonial masters. 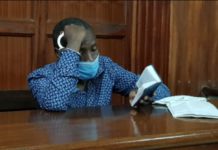