A driver and his mate who assaulted a passenger onboard their vehicle, have been sentenced to a total of four years imprisonment by the Kumasi Metropolitan Assembly (KMA) court.

Eric Amponsah, 27, the driver was given a three-year sentence while Siaka Alhassan 25, the mate, received a year’s sentence.

They pleaded not guilty to the charge but the court presided over by Mr Abdul Razak Musah, found them guilty after the trial.

Police Chief Inspector, Francisca Nyarko told the court that the complainant, Haruna Hamid, was a photographer, while the convicts were in charge of a Nissan Urvan bus with registration number AS 591-16.

She said on August 04, last year, at about 2040 hours, the complainant boarded their vehicle from Maakro to Kronum.

The prosecution said in the course of the journey, a misunderstanding ensued between the complainant and other passengers on board.

She said when they reached Kronum lorry station, the complainant notified the convicts to stop the vehicle to enable him to alight, but they refused.

Chief Inspector Nyarko said the complainant then forced himself out of the vehicle while it was still in motion.

Prosecution said in the process he pulled the gate and the side glass removed.

The mate jumped out of the vehicle, attacked the complainant, and subjected him to severe beatings.

Chief Inspector Nyarko said the driver later stopped the vehicle, and also attacked the complainant with a metal object, hitting his skull which resulted in a deep cut that was bleeding profusely.

Prosecution said, the complainant also lost a tooth during the beatings.

She said a witness in the case, who came to his rescue, assisted him to the police station to lodge a complaint.

Inspector Nyarko said the complainant was issued with a medical report form to attend hospital for treatment.

The medical report form was returned endorsed by a medical officer upon which the convicts were arrested.

She said caution statements were obtained from the convicts and after thorough investigations they were charged with the offences and brought before the court. 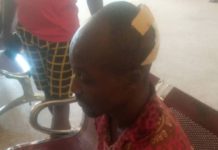 Driver escapes death while chasing rider who insulted him 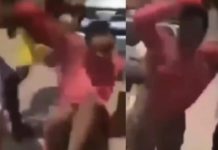