As creative director for Dior Men, Kim Jones has shown a flare for art world collaborations, teaming up with the likes of Raymond Pettibon, KAWS, Hajime Sorayama and Daniel Arsham to enrich his streetwear-meets-Savile Row collections and shows.

And now, he’s added a new artist to the list, working with Ghanaian painter Amoako Boafo to create one of the most talked-about collections of the Spring-Summer 2021 menswear season.

Modeled by an all-Black group of models in a short film uploaded to YouTube (the new standard now that the coronavirus pandemic has ruled out the possibility of physical fashion shows for the time being), Jones’ latest designs masterfully marry Boafo’s motifs and sensibilities with his own.

Color-blocked cummerbunds and pops of neon recall the bold backgrounds upon which the artist finger-paints his faces; a shirt embroidered with lengths of ivy has roots in a portrait Jones observed at the artist’s Accra studio; one of Baofo’s subjects looks out from a fur turtleneck.

The seed of the collaboration was planted last December. Jones, who was showing his pre-fall collection in Miami, was deeply struck by Boafo’s exhibition at the city’s newly opened Rubell Museum.

“(Boafo’s work) just spoke to me; I was immediately drawn to it. The intensity of his portraits, the power of movement and the choice of colors in them — everything touches me in his work and the way he sees things,” Jones said in a statement.

“In designing this collection, I wanted to share that passion and celebrate the power of his work, to help it become even better known.”But just as art has long played a role in Jones’ creative practice, Boafo has long harbored a love of fashion. “Fashion inspires my work and so I tend to look at characters that have that sense of style,” he explained from his studio in the film.

Working with a Black artist at a time when the fashion industry is increasingly being called out for systemic racism, could be seen as opportunistic. But for Jones, who moved between Ethiopia, Kenya, Botswana and Ghana as a child with his hydro-geologist father, the connection was more personal.

“I wanted to work with an African artist for a long time because I grew up in Africa, and African art is something that’s always been important to me,” he explained in the video.

The show is a contrast to the offering presented by Dior during the couture shows in early July. Womenswear designer Maria Grazia Chiuri presented her latest collection in a short film starring a notably all-White cast of models. 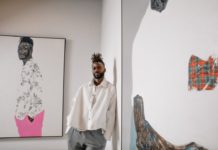 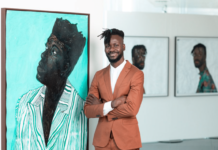 Ghanaian artist Amoako Boafo named in ‘Time100 Next’ alongside Davido, Amanda Gorman, others