A shocking video online has captured moments security personnel uncovered dead bodies and skeletons during a raid in a ‘Juju’ man’s house.

Though the location of the said raid is not known, the suspect, who is currently in police custody, is said to be a Togolese.

In the video, sighted on Instagram, some people are seen screaming while retrieving dead bodies buried underneath a huge pit in the compound.

Reports indicate he was arrested together with his 30 servants. 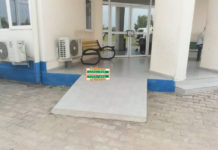