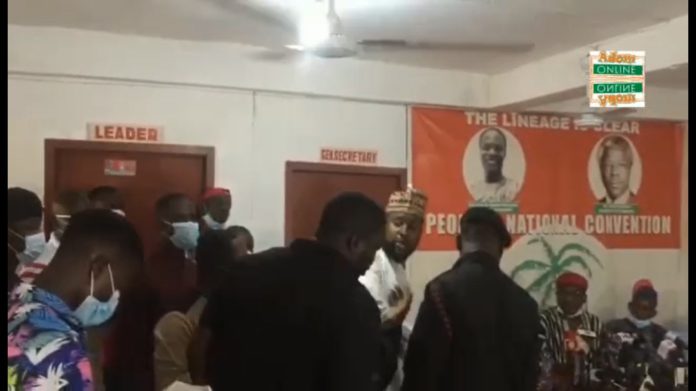 Chaos broke out at the headquarters of the People’s National Convention (PNC) in Accra as party leaders engaged in heated exchanges during a press conference on Wednesday.

The presser was to brief Ghanaians on the suspension of their National General Secretary, Janet Nabila.

Mr Kankan’s behaviour brought the meeting to a halt for some time as the altercation ensued.

However, some officials of the PNC together with the police forcibly dragged him out of the hall as he tried every means possible to defend Madam Nabila.

All doors were locked after Mr Kankan was ushered out for the conference to continue.

Though Madam Nabila has fought off claims of her suspension, the party leadership has given her a one-week ultimatum to hand over to the National Treasurer.

A decision has also been made for one Prince Agyeman Duah to serve as the acting General Secretary until further notice.

Present at the press conference was the 2020 Presidential Candidate David Apasera, the National Chairman, and other Party Executives.