According to him, the recent incident in which Wesley Girls’ Senior High School refused to let Muslim students partake in the ongoing Ramadan fast has caused the Chief Imam so much worry.

He said: “Anytime Chief Imam hears this he feels disappointed, he feels worried, and when he calls and talks to me he’s like ‘these are the people that they hail praises on me, they show me great respect anytime, but my grandchildren are in their schools, and my grandchildren are not treated well.”

He said: “Meek as he is, the Chief Imam will never tell you go and shout, go and do that but he feels disappointed and I feel disappointed.”

Speaking on JoyNews’ AM show, he said the mistreatment against Muslims must stop.

He said the continued mistreatment of Muslim students could have psychological implications on them.

“I have been a teacher, and I understand the psychological implication of this, any child you mistreat within the school system, there is psychological impact on his being as he grows further.

“The same thing any child who is mistreated, treated with indignity, disrespect, his rights are abused, that child will grow never to see anything wrong with abuse of human rights,” he said.

He, thus, called on teachers to show compassion to the students even as they try to uphold the highest discipline in their various schools.

“And I think that as teachers even within the mission, we’re told that compassion is something that we all uphold.

“I find a contradiction when Muslim children are in Christian schools and Christians who uphold the virtues of compassion and respect for human dignity will not be able to look within the frame of their discipline to also respect the diversity in it,” he added. 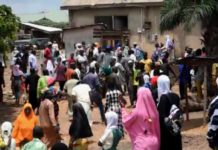