The Deputy National Organiser of the NDC, like many others who are still in a state of denial over the Statesman’s death, believes he has left a vacuum nobody can fill.

Taking to his Facebook page, he, among other things, eulogised Papa J as he was popularly known for his charisma which earned him the admiration of many.

“You were the kind of man who will say it as it is no matter what! Papa J you were too much and we loved and respected you for who you were,” parts of his post read.

He further prayed for the founder of the NDC to rest in the bosom of the Lord and posted a photo he took with him.

“May the great angels of heaven protect and preserve you in Jesus name 🙏🏽 Last Sunday 😪 Jerry John Rawlings,” he added

Mr Rawlings died on Thursday, November 12, 2020, at the Korel-Bu Teaching Hospital while undergoing treatment after a short illness.

The body of the former President has been laid in state at the Accra International Conference Centre today, Monday 25th and Tuesday 26th of January and a detailed programme has been laid out for members of the public and other state institutions to pay their respects.

The burial service, which will take place at the Independence Square on Wednesday, January 27 is open to members of the public. 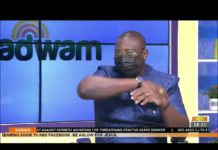