The World Health Organisation (WHO) through the Cervical Cancer elimination initiative is aiming at vaccinating 90% of girls globally with the human papillomavirus, or HPV vaccine by the age of 15.

WHO is hopeful of achieving this by 2030. HPV is the most common Sexually Transmitted Infection (STI).

“Cervical cancer is preventable and curable, as long as it is detected early and managed effectively. Yet it is the fourth most common form of cancer among women worldwide, with the disease claiming the lives of more than 300 000 women in 2018.

Few diseases reflect global inequities as much as cancer of the cervix. Nearly 90% of the deaths in 2018 occurred in low- and middle-income countries. This is where the burden of cervical cancer is greatest, because access to public health services is limited and screening and treatment for the disease have not been widely implemented.”

In 2020, just 13% girls aged 9-14 years were vaccinated against HPV – the virus that causes almost all #CervicalCancer.

Almost 80 countries – home to around 2/3 of the global cervical cancer burden – are yet to introduce this lifesaving vaccine. pic.twitter.com/GnLxpEFcB4

According to the Organization, Cervical Cancer could be the first cancer ever to be eliminated if aside vaccination, 70% of women screened use a high-performance test by the age of 35, and again by the age of 45.”

To eliminate cervical cancer, the WHO says all countries must reach and maintain an incidence rate of below four per 100 000 women.

“Each country should meet the 90-70-90 targets by 2030 to get on the path to eliminate cervical cancer within the next century. Together, we can end cervical cancer once and for all!”

Cervical cancer could be the first cancer EVER in the world to be eliminated, if

In May 2018, the WHO Director-General announced a global call for action to eliminate cervical cancer, underscoring renewed political will to make elimination a reality and calling for all stakeholders to unite behind this common goal.

Following this, the World Health Assembly in August 2020, adopted the Global Strategy for cervical cancer elimination.

Below is the Global strategy to accelerate the elimination of cervical cancer as a public health problem: 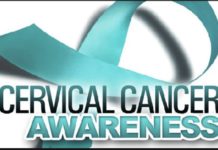