Songstress, Stephanie Benson has said she does not mind walking naked on the streets because “that’s life”.
According to her ““I have a nipple created for me…. I can show it to you right now. I don’t mind because that’s life. I can walk naked but you guys will kill… I’ve done it before in London for a dance event”.
Stephanie who was speaking in an interview with Accra-based GhOne TV denied she has had had a plastic surgery hence reason why she looks younger for her age.
To her consistency in her exercising routine has worked that magic in her life.
She disclosed that she once had a breast implant but got it removed because it could have had an adverse effect on her.
“I got white people’s butt… I don’t want implant anymore. After I had my children, I had a breast implant because I had small boobs. But after the implant was done, my boobs got really big so I took them out. For now, I’ve had both my breast and the implant removed and the breast reconstructed because of cancer. I was lucky because it was cut early.”

Husband sends wife to parents nak3d after catching her cheating 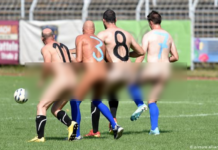 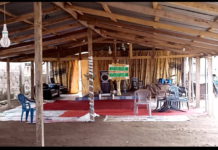 I used my boobs to win special contracts – Stephanie Benson