BET award-winner, Burna Boy, has warned haters to keep off him as he proves he is fearless in handling a gun.

The African Giant was captured in the company of a gun instructor who ensured he fired directly at his target.

The artiste did not let his instructor complete his countdown when he cocked his AK47 gun, aimed and started firing directly at the shooting target planted at the far end of the room.

His wild shots impressed his instructor who could be heard in the background leading him on. 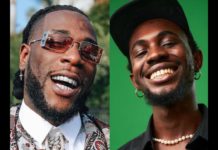