A wedding was brought to a screeching halt when the bride fainted in the presence of the multiple guests.

The bride, identified as Anne Ntini Dube, was stunned when the first wife of his groom showed up to the wedding venue with her children and legal documents.

Videos widely in circulation captured the moment the uninvited wife stepped unto the aisle, straight to the altar while the service was ongoing.

She demanded for the microphone and she was vocal of her displeasure of her husband, adding Anne as his 5th wife.

The bride, who seemed to know the woman, struggled to stay on her feet as her rival dished out their family secrets. She signaled to be led to her seat.

Shortly after, it is reported that Anne slumped, before her bridesmaids scrambled to shield her from the cameras at her most vulnerable moment.

In one of the videos, a family member of the bride was angry at her, for failing to disclose the man was already a husband to four women.

“Everisto deserves to be treated that way because he knew that he has four wives.

“We have different types of marriage Acts in our country and he should have chosen one that goes with his beliefs or preferences.

“A white wedding is for men who are comfortable with one wife, kwete vebarika.

“As for Anne, she wasted our time in preparing two bridal showers when she was aware that Everisto had four wives.

“The two have shamed us. They invited us to a shameful wedding.”

Below is part of the footage from the aborted wedding ceremony: 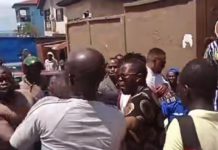 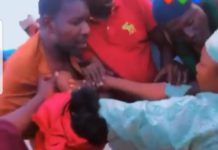