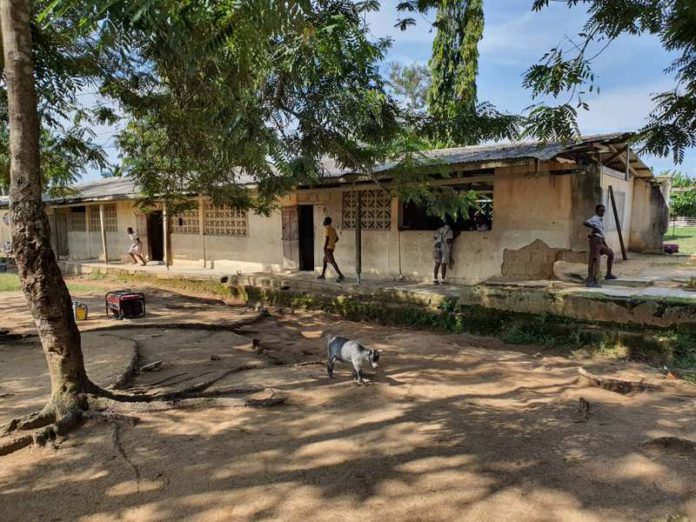 Some women at Breman Jamera in the Odoben Brakwa District of the Central Region, who lost their kids after a school block collapsed four years ago, have said they still picture the event on that fateful day.

According to them, ever since the incident happened, they have been worried about the fact that the death trap structure may kill more pupils if it is not reconstructed.

The emotional women made this known when Adom FM’s morning show Dwaso Nsem Show team visited the school as part of a project by the Multimedia Group Limited dubbed ‘The Classroom Project’ which is aimed at soliciting funds to help with the building of the school.

A parent, Esi Appeah, who lost her three-year-old child, said she is still worried and still in pain as her child would have turned seven now but for the tragic incident.

To her, anytime she sets her eyes on the school, fear grips her and therefore called on authorities to do something about the death trap building so that pupils and teachers can be happy while in school.

“When they told us they are reconstructing their building after the collapse, we never heard from them again. I am pleading with benevolent people to come to our aid and get the school built once again. At least, that will give us relief, else we will continue in this misery,” she cried.

Another woman, Adwoa Benewaa, who could not control herself, said she lost her five-year-old son to the same disaster and wants government to come to their aid and get the building constructed to prevent another fatality.

Recounting her ordeal, she said she always weeps:

“I am always in pain. I have stopped going to that school because I always become sad anytime I get there. I really miss my child, but I know he is in a good place. She told me she will always be a nurse when she grows. It is just unfortunate she didn’t leave to see her future.”