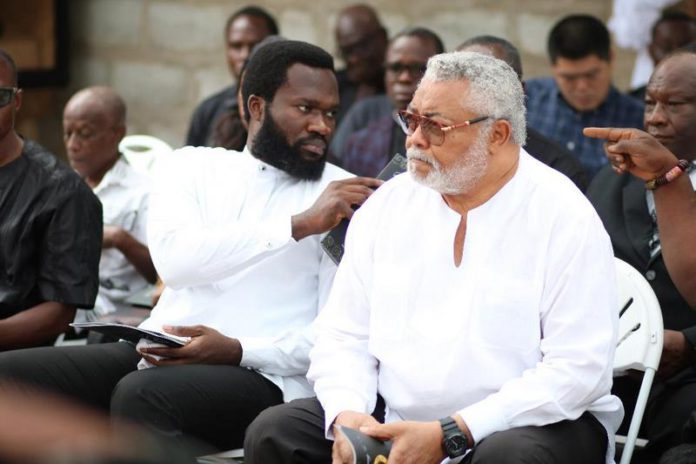 A former aide to former President Jerry John Rawlings says Africa must be grateful to the deceased Ghanaian leader, for establishing a game-changing democratic transitional mechanism that has become an example on the continent.

Dr Donald Agumenu, speaking at the commemoration of the one year anniversary of the death of Mr Rawlings, said it is incumbent on Africa to always pay tribute to his former boss.

He said it was Mr Rawlings who “set up a second to none record by peacefully transitioning from military rule to a constitutional rule and also transferring power in a multi-party democratic system, from his party to the opposition party.”

The late Rawlings, Ghana’s longest-serving head of state, died on November 12 last year, aged 73, to the shock of Ghanaians as there was no hint of him being ill or bedridden.

Dr Agumenu, who worked closely with Mr Rawlings and served as the former leader’s aide, told Anadolu Agency that “God sustained Rawlings for a divine assignment to bring the kind of transformation that Ghana and for that matter, Africa needs.

“A wave was blowing at a point that the nation needed somebody badly. And God was timely by introducing Rawlings. No wonder people referred to him as Junior Jesus,” he asserted.

Rawlings seized power in Ghana twice [in 1979 and 1981], but restored democratic and constitutional rule in the country in 1992 before handing over power to the opposition New Patriotic Party in 2001.

Following the first failed coup on May 15, 1979, Rawlings was arrested and put before trial on treason charges which carried death penalty.

He mysteriously escaped the execution when his colleague junior officers in the Ghana Armed Forces disrupted court proceedings by removing Rawlings from detention and later overthrew the country’s military government of General Fred Akuffo on June 4, 1979.

Instead of him taking direct control of the affairs of the state, he rather handed the leadership to a civilian, Dr Hilla Limman, who won the presidential election after a brief transitional period.

Two years later, Rawlings fired the democratically elected head of state, Hilla Limann, and stayed in charge until 1992 when he took an unprecedented step to usher Ghana back to constitutional rule and multi-party democracy.

He contested elections twice, won resounding victories and later resigned peacefully after the expiration of his tenure of office as spelt out in Ghana’s 1992 Constitution.

Political observers on the African continent consider the democratic feat chalked up by Rawlings incredible and unimaginable as most leaders on the continent tend to exhibit the habit of holding on to power perpetually.

Dr Agumenu pointed out that Rawlings “… set the pace in Africa for the smooth democratic handover of power” and expressed happiness at how such democratic transitions are being staged elsewhere on the African continent peacefully.

He added, “That phase is something that Africa and the new generation must take seriously, because it is not easy with the level of energy that he had, coupled with his level of popularity, even till the last day, he was a household name.”

Asked whether Rawlings had regretted handing over power, Dr Agumenu replied emphatically no and quickly added that as a distinguished leader, Rawlings recognised the impact of critical decisions and leadership dynamics.

Why the switch from military to constitutional rule?

As a military ruler, Rawlings wielded so much power. And, it was least expected that he would embrace constitutional rule and multi-party democracy, where other state institutions are empowered.

He took those decisions for the people irrespective of their party affiliation, creed and culture. Rawlings superintended over the creation and the approval of the 1992 constitution of Ghana, the supreme law that has guided the country until today.

Coups on the rise on the continent

In recent times, attempted or successful coups in Africa are occurring more frequently with Sudan being the latest after Niger, Guinea and Mali witnessed theirs, all this year.

The coups have largely been blamed on greed, with heads of state altering their constitutions to satisfy personal needs, something Dr Agumenu firmly believes Rawlings would not condone.

“Rawlings would not endorse people not relinquishing power. No, that was not his nature. He would always tell you the power was for the people and still the power is for the people. So, you need to know when the beat is off. And he was so passionate on the need to perpetuate rule of law, accountability and social justice.”