Popular Nigerian cross-dresser, Bobrisky, is in the grips of the police for alleged fraud.

Reports indicate he allegedly swindled an amount of N30 million from a client but failed to keep up her part of the bargain and is unwilling to refund the said amount.

Confirming the news hours after his arrest in Lekki, Lagos, the Nigeria Police Force has given more insights.

“Bobrisky was arrested in the early hours of today following a petition by a Nigerian woman that the cross dresser collected N30m from her for sales but did not keep to the end of the deal,” he said.

Bobrisky has, however, been granted bail but the case is still an active one as investigation is still ongoing.

I’m prettier than 90% of the ladies in Nigeria – Bobrisky 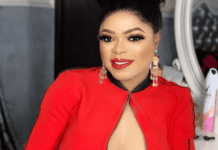 Bobrisky reveals where she first had s*x