Deputy Transport Minister, Nii Kwatei Titus-Glover, is urging the government to, as a matter of urgency, re-consider calls to arm policemen while on traffic duty.

Mr Titus-Glover’s plea comes after a ‘trotro’ driver on Friday morning knocked down and killed a policeman around the Trinity Theological Seminary in Accra in an attempt to avoid arrest for an alleged traffic offence.

Speaking on Adom FM’s Dwaso Nsem, Monday, Mr Titus-Glover stressed protection of personnel while on duty was a call in the right direction, adding that they must at least be given pistol.

According to him, some of these personnel have devoted themselves to serve Ghanaians and mother Ghana diligently even at the mercy of the sun and rain.

Mr Titus-Glover, who is also the Member of Parliament for Tema East, further appealed to the Inspector General of Police, Mr James Oppong Boanuh, to be swift in serving justice on behalf of the late policeman, identified as Sergeant Moses Appiah.

“The police must be quick in pulling out his pictures, make house visits and get all vital information about the driver,” he said. 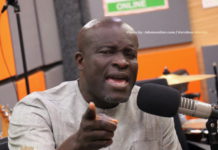