According to him, the former Deputy Attorney General did not offend the Chief Justice by stating that he had no faith in the judiciary during the 2020 election petition hearing.

“You earn the faith and belief of the people; you do not force it. What is Dr Ayine going to explain and to who because I don’t even know who is the chairman of the council,” he said.

His comment follows a petition to the Disciplinary Committee of the General Legal Council of Ghana by the Chief Justice.

The CJ had asked that Mr Ayine be investigated and necessary sanctions applied against him over comments he allegedly made against the Supreme Court.

But, speaking on Adom TV’s Badwam, General Mosquito as he is widely known, argued it was a gathering to analyse the judicial system.

“We have realised the Chief Justice is trying to intimidate Dr Ayine but we also want to tell him that you may want to scare a Zongo boy but not with a long beard,” he said.

He noted that the NDC will not take the petition lightly as it will hold a press conference on Tuesday in respect of same.

Dr Ayine who is also the MP for Bolgatanga East was said to have questioned the independence of the Judiciary.

He was found guilty of contempt during the petition hearing for comments he made at a press brief on February 16, 2021, which suggested that the Supreme Court had a “pre-determined agenda” to rule against the petitioner in the 2020 presidential election petition, former President John Dramani Mahama.

This, he explained, is due to the manner in which the Supreme Court adjudicated the 2020 election petition during a discussion on Presidential Election Petitions and their impact on Africa’s Democracy.

He was hauled before the Apex Court but was later discharged after he apologised for the comments.

Subsequently, he is alleged to have made similar comments during the said discussion. 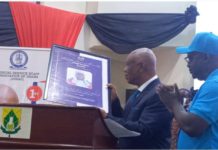