Actor Arnold Schwarzenegger‘s son, Joseph Baena, already follows in his dad’s footsteps when it comes to bodybuilding but now he’s mimicking his pops in Hollywood.

Sources close to Joseph tell TMZ that he landed his first big acting gig earlier this year in the John Malkovich sci-fi flick, “The Chariot”.

The source added that he’s hired a manager, Henry Penzi, and is booking more and more roles.

Meanwhile, Joseph just finished shooting an independent film called “Bully High” – where he plays the school president, one of the main characters.

“Bully High” is however directed by Bill McAdams Jr.

On top of that, sources also say Baena’s set to appear in an upcoming project with Bruce Willis and another project with Cartoon Network, adding that, there are lots of interests in booking him for other gigs, too.

Along with Joseph’s professional life taking off in 2021, it’s also been a big year personally.

As previously reported, he was seen publicly hanging out with his half-brother, Patrick, for the first time in April.

So, looks like Joseph’s making his old man proud and we already know he can be bad to the bone, too. 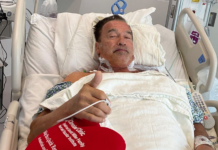