The 26-year-old female teacher at Amantin Roman Catholic Junior High School, who went missing two days ago in the Atebubu-Amantin Municipality, has been found dead in the Volta Lake at Yeji.

Benedicta Gyane Afofie disappeared mysteriously from her home at Atebubu on Thursday, April 2, 2020.

Speaking to Adom News’ Christian Ofori Kumah, the family disclosed they all went to bed together on the night of Wednesday, April, 1 but she was discovered not around in her room as at 4:00 am by her mother.

With her phones and other personal belongings left behind, there were initial hopes that she might be hanging around in the vicinity but that hope faded by the day.

However, the mother was compelled to lodge an official complaint with the Atebubu Police after she failed to return in the evening.

Series of announcements were also caused to be made on local radio stations but they all yielded no results.

Two days later, the lifeless body of Miss Afofie was retrieved from the Volta Lake in Yeji by some local divers it was reported she had drowned in the lake.

Police in Yeji revealed that they have launched investigations into the matter but she was buried right away due to the decomposed nature of the body.

Described by neighbours, close friends and colleagues as friendly and easy-going, the death of the former University of Development Studies student has thrown the Atebubu township into shock.

Meanwhile, the mother of the deceased is said to be in distraught following the untimely and mysterious demise of her daughter. 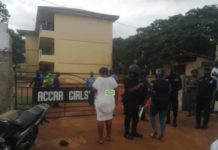 Saudi man to sue wife for accessing his WhatsApp messages