A man, who only gave his name as Kwadwo, has narrated how his friend dropped dead in his presence on his first day at a galamsey site.

According to him, all attempts to live a meaningful life proved futile with his only option to settle with a friend after the death of his parents.

“I had lost all hope after the death of my parents and grandfather who offered to take care of me but died later and I needed to survive,” he said.

Opooman, as he was popularly known at Obuasi, said this while sharing his experience as a galamseyer on Adom FM’s Dwaso Nsem social segment, Y’asem Nie.

“The stories of people getting trapped and dying in galamsey pits scared me but I had to do this after my friend convinced me about how lucrative the work was.

“I agreed to join him for the work in deep mining pits with torchlight being our only source of light but unfortunately, he dropped and died on my first day while climbing a ladder rope which was our source of transportation within the pits,” he narrated.

He added that though his friend’s death heightened his fears, he continued to stay in the pits for weeks where he kept all his food and other essentials in search of gold.

To him, galamseyers have no regard for death after a long stay in the pits since they encounter them on daily basis, hence see it as part of their lives.

“The pits are in levels and you can drop dead from anywhere at any time and your body wouldn’t even be found so death was like our best friend,” he recounted. 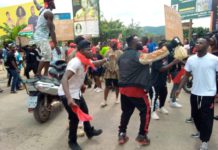