A man, believed to be about 100 years old, has died after allegedly being hit by the wife, 64-year-old Nyamma Ayeliwinum at Kyenkyenase, a farming community in the Dormaa East District of the Bono Region.

The deceased, Agya Gurusi, is alleged to have been hit in the head with a fufu pounding stick (pestle) at their home, Wednesday evening.

According to a witness who is a relative, Afia Gurusi, a misunderstanding ensued between Agya Gurusi and his wife, Maame Gurusi, and efforts were made to separate them.

She explained that to their surprise and at their blindside, the wife allegedly struck the man in the head leading to his immediate collapse.

When other neighbours arrived at the scene, Agya Gurusi’s lifeless body was found lying in a supine position in a pool of blood, with his sandals and the stick beside him.

The suspect is seen in a video accusing neighbours, who arrived at the crime scene, of being witches, when they questioned her motive.

In the same video, some angry youth were seen using a rope to tie the suspect, allegedly due to her violent nature.

Confirming the incident to Joy News, Dormaa East Police Commander, DSP Francis Akwasi Asante, said the suspect is in their custody and they were preparing to put her before court at Dormaa Ahenkro.

He added that the body of the deceased has been deposited at the Dormaa Ahenkro Presbyterian Hospital mortuary at Dormaa Central for preservation, awaiting autopsy. 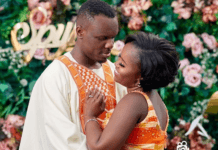