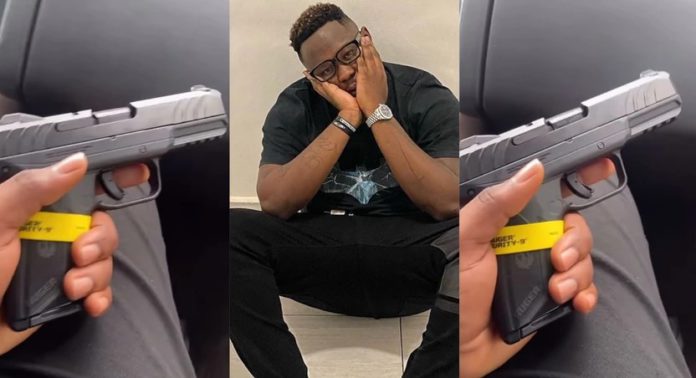 Rapper Samuel Adu Frimpong, popularly known as Medikal, has responded to an invitation extended to him by the Accra Regional Police Command.

Multiple media reports suggest the police invited the musician for brandishing a gun in a video posted on social media.

The reports also indicate that the ‘Ayekoo’ hitmaker was interrogated by the Accra Regional Police Command.

On September 26, rapper Medikal raised eyebrows on social media when he was seen in a video flaunting a pistol believed to be newly acquired.

The video, which caught the attention of many, showed him holding the famous Ruger American Pistol.

His arrest comes just hours after he appeared in court to support Shatta Wale during the latter’s trial over the hoax shooting incident.

The controversial artiste pleaded not guilty to a charge of the publication of false news.

On October 19, the artiste turned himself in after the police had declared him wanted.

He had allegedly claimed that he had been shot and receiving treatment, which turned out to be a hoax.

Two of his accomplices were also charged with abetment of crime.

Police in a Facebook post said, “they were remanded following a request by the police for their continued detention due to ongoing investigations on their alleged involvement in the publication of false information with the intention to cause fear and panic.”