Pollster and Managing Editor of the Daily Dispatch Newspaper, Ben Ephson, has projected that President Nana Akufo-Addo will win the December 7 election by 52.6%.

According to Mr Ephson, his projection was based on respondents sampled in six regions in the country including Greater Accra, Western, Central, Ashanti and Eastern Regions.

He indicated former President Mahama and the flagbearer of the NDC, John Mahama will pull 45.7% of the total votes that will be cast.

Elaborating on his prediction on Asempa FM’s Ekosii Sen, the pollster noted there was, however, a plus or minus 2% margin of error.

He noted the focus of the study for voters was the incumbent government’s Free Senior High School (SHS) policy as well as corruption tag on both candidates.

“The ordinary man will tell you John Mahama has been portrayed as someone who doesn’t like free SHS and Nana Addo has proved that he is going to indeed maintain the free Senior High School policy and people have believed him so they will vote for him,” he stated.

On the corruption tag, he said: “Again in 2016, the governing NPP painted Mr Mahama as a corrupt appointee and people believed it. The NDC has not been able to erase that perception.”

However, he indicated Mr Mahama’s fortunes could turn around if he is able to poll 30% votes in the Ashanti Region, 40% in the Eastern Region and manages to win the swing seats. 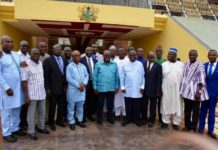