A video has popped up on social media showing veteran music producer, Sugar Tone, living like a destitute.

In the video, Sugar Tone is seen in an uncompromising position as he laid by the roadside at an unknown location.

According to a commentary accompanying the video, the spectacle that unfolded in the video had become the life of the famous music producer.

He thus asked Shatta Wale and other artistes who worked with the producer to come to his aid.

For someone with such a profile, one would think Sugar Tone will be living a very decent life even after going off the radar.

But, that does appear to be the case for Sugar Tone who was also known as ST as it appears life has been tough and unpleasant for him.

Sugar Tone was one of the prominent music producers in the early to mid-2000s, producing some of the biggest hits of the time.

Among the songs he produced were Bandana’s (now Shatta Wale) Moko Ho, Daseebre Gyamenah’s Settei, Reggie Zippy’s Virgin and For Sale, and many more.

It cannot exactly show what might have happened to Sugar Tone to cause such a downward spiral.

But he is on record to have admitted to using marijuana in the past, claiming it brings out his creativity. 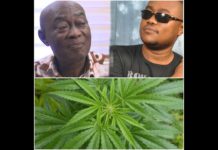