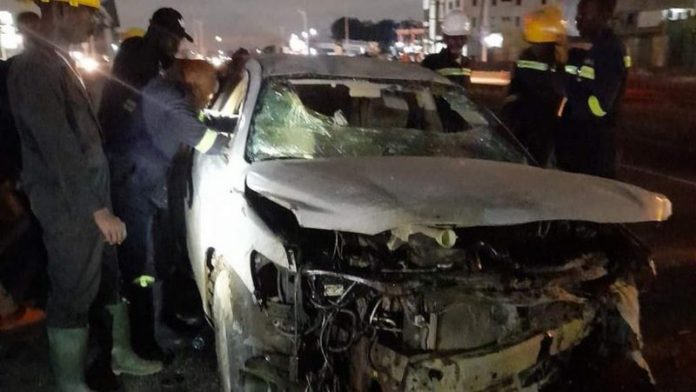 Two Indian nationals have met their untimely death while seven others sustained various degrees of injuries in a motor accident over the weekend.

The motor accident occurred at Gomoa Mampong near Winneba in the Central Region, where the deceased identified as Rujuta Ferrao, 46 years, and Rosa Ferrao 72, crushed to death.

The Indians were pronounced dead on arrival at the Trauma and Specialist Hospital, Winneba.

The other Indians are Noel Ferrao, 47, an employee of Olam Ghana Limited, and Naomi Ferrao, 15.

The injured are on admission responding to treatment at the same facility.

An officer of the Effutu Municipal Police Division of the Motor Traffic Transport Department, Sergeant Maxwell Yeboah, who explained the incident, said a Mitsubishi Pajero Station Wagon, with registration Number GE 6723-17, belonging to Olam Company Limited and driven by Jacob Abusah Ahideke, aged 40, was from Accra to Apam Junction, with four Indian nationals on board.

According to him, last Saturday, around 3:00pm, the driver of the Mitsubishi Wagon, on reaching a section of the road at Gomoa Mampong near Winneba, lost control of the steering wheel and the vehicle veered into the opposite lane and collided with an oncoming KIA Truck.

He said the Kia Rhino truck, with registration number GR 9705-17, driven by Ebenezer Offei, 27, was loaded with bags of sachet water from Agona Swedru to Accra, with three persons on board.

He said all the occupants of both vehicles sustained various degrees of injuries and were rushed to the Trauma and Specialist Hospital at Winneba for treatment but Rujuta Ferrao and Rosa Ferrao were pronounced dead on arrival.

The bodies of the deceased have been deposited at the Hospital’s mortuary for preservation.