Traders were in outrage when fire erupted in some parts of the Bole market in the Savannah Region.

According to the affected victims, the fire started at a motor mechanic shop in the heart of the market, Tuesday afternoon.

The scene was close to the tubers lane, burning stock of yams and dry cassava into ashes.

Speaking to Adom News’ Rebecca Natomah, they further stated when the fire started, attempts were made to retrieve some items, but the blaze made it impossible.

It was in that period, they said, that the fire began spreading into other sheds rapidly, forcing the traders to flee the market.

The Bole Fire Service personnel arrived at the scene shortly after they were notified and successfully put out the fire.

What remains of the scene are pieces of motorbike parts and smoke from the debris, as well as wailing and stranded traders. 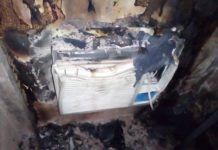