The Majority Leader, Osei Kyei-Mensah-Bonsu, has described as wrong, the drama that erupted when Parliament was in session on Friday and getting ready to vote on the 2022 budget.

According to him, though they [Members of Parliament ] may have their disagreements on issues, he doesn’t think they should go to the House determined to run the Speaker down.

“I believe what we did was wrong, it runs in the face of the constitution and the standing orders but everything aside, the integrity of the chair must be protected by all of us,” he said in an interview on Accra-based GTV.

The Majority walked out after the Speaker directed Ministers of State who are non-Members of Parliament (MPs) to vacate the Chamber to allow MPs to take a division vote on whether to postpone the vote on whether the Finance Minister should be allowed to further engage the House or not.

Majority MPs, while vacating the Chamber, protested that the National Democratic Congress chief scribe, Johnson Asiedu Nketia, who was seated in the public gallery, should as well vacate the Chamber.

A development that made the leader said Mr Bagbin behaved like he was the Speaker for only one side and the conduct was appalling.

Mr Mensah-Bonsu, who is also the Minister for Parliamentary Affairs, argued his side will not tolerate any disrespect from the Speaker.

However, he has appealed to both sides of the House to find a middle ground going forward, stating he is ready to engage the leadership.

“If the speaker is demeaned, it affects all of us but I would want to believe that the goodwill of both sides will have a way out of this,” he added.

Meanwhile, Parliament ended up rejecting the 2022 budget in the absence of the Majority caucus.

Play the Majority Leader’s audio above: 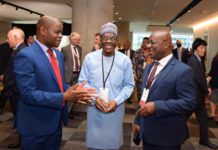