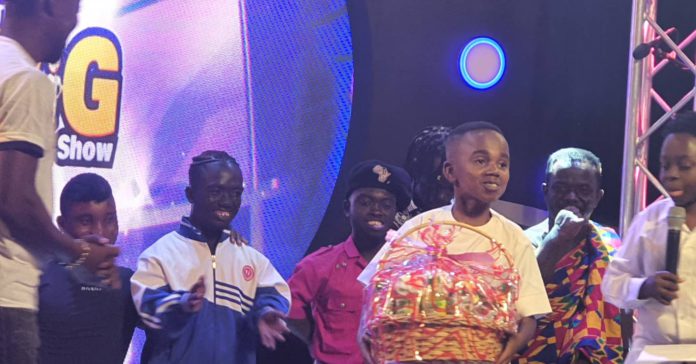 It’s a competition so I am okay with everything that has happened. I thank God for the eviction and it doesn’t mean my talent has reduced. People will see me more on their screens now, these were the words of contestant Tapoli after he was evicted from Adom TV‘s The Big Talent show in week 10.

Contestants were urged to sell sponsors backing the show through their performances this week and Tapoli couldn’t garner enough votes to save himself.

According to him, this isn’t the end of the journey for him as Adom TV‘s mileage over the weeks will help him secure more deals after he leaves the talent house.

Meanwhile, Tapoli opened up the show this week by introducing another fashion show during his performance.

His presentation wasn’t catchy and judges asked him to better his craft prior to his eviction.

Shatta Wifi did a rendition of Fameye’s Long Life song. He crafted his performance around the sponsors on the show as he rapped.

Judges commended him for the performance but were quick to add that his energy level was low.

Size Two took on the role of being a quack doctor this week. His fake treatment got him in a brawl with one of his old-aged patients which eventually got him arrested.

C-Nortey received a standing ovation from Judge Akumaa Mama Zimbi after he performed this week.

One of the judges, Clemento Suarez, who is not easy to impress since the inception of the show, described him as a champion performer.

He was lauded for how he celebrated sponsors backing the Big Talent programme.

Faith Power, the man of many talents in the show so far continued to amaze the judges with his awesome acrobatic movements.

The judges could hardly remain in their seats when he mounted a bicycle on his head amid other surprising gestures.

Nana Yaw engaged in an outstanding cultural display. His performance was so on point that judges Akumaa Mama Zimbi and Clemento Suarez, including Adwoa Smart, got out of their seats to perform with him.

It was such a beautiful sight to behold on the evening.