Police at the Kpeshie Divisional Headquarters in the Krowor constituency have arrested two voters believed to have taken photos of their ballot papers during the Special Voting.

The accused persons, who are currently behind bars pending investigation, have denied any wrongdoing. However, the Police maintain that evidence of the act was found on their phones.

A third incident involving a National Democratic Congress (NDC) polling agent, who accused a lady of the same violation, was dismissed by the police over lack of evidence.

Member of Parliament for the area, Mrs Elizabeth Afoley Quaye, who was at the location, said the arrested persons might have taken the shots out of excitement.

Mrs Quaye, who is seeking a second term in office on the ticket of the incumbent New Patriotic Party, also expressed optimism about emerging victorious after Decemeber 7.

Meanwhile, polling agents at the voting centre have expressed satisfaction with the conduct of the Special Voting exercise.

The Special Voting exercise, which took place at 311 designated voting centres located in all the 275 constituencies, was meant for people with special election day assignments. 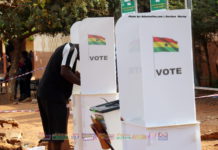