A gang of armed robbers has attacked and killed a mobile money vendor in cold blood at Awutu Adawukwa near Bawjiase in the Awutu Senya West District in the Central Region.

The gang, numbering seven, approached Atsu under the pretext of requesting assistance from him to find their way.

The robbers told the unsuspecting vendor that they were en route to Amasaman but had lost their way.

After being showed the way, they confronted Atsu with guns and demanded he surrendered his sales.

An eyewitness who spoke to Adom News’ Isaac Baah said the victim refused the robbers’ demands in spite of series of warning shots.

It was in the tussle that Atsu got shot in the stomach and chest, forcing his intestines to gush out of his body.

The Bawjiase District Police Command have since taken over the issue. 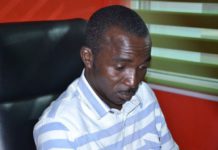