Some residents of Sekondi-Takoradi in the Western Region say they are living in fear after recording three robbery cases in three days.

According to them, armed robbers on Friday evening shot and made away with the daily earnings of a Mobile Money vendor at about 7:pm at Ahenkofi in the metropolis.

“It is very scary the rate at which this is occurring, see how this has ended someone’s life and still now we don’t even have a clue who is behind it,” a resident said.

Another resident narrated how “someone snatched my bag from me and dashed into a bush close to us. The sad thing is they hurt you in addition to stealing from you.”

The second incident reported to Adom News is said to have occurred close to the Takoradi Presbyterian Church on Saturday, barely 24 hours after the Ahenkofi incident, also around 7:pm.

As if that was not enough, the city witnessed another attack on Monday afternoon around 2:pm at Takoradi Amanful, where a man and wife were robbed leading to the death of the man.

“Even yesterday when I was going home I was afraid because the thing is they might not even know whether or not you have money in your bag then they attack you so what is going on is disturbing,” a vendor noted.

Another resident advised vendors, especially those who engage in the Mobile Money business to close around 4:pm to prevent such robberies.

Other residents suspect that the surge in robbery activities in the region may be due to the influx of foreigners, especially Nigerians residing among them and the increasing number of motor riders.

“We are calling on authorities to speed up an intervention for us. Our leaders must check the influx of foreigners in this country and some of the motor riders as most of them are using it for robbery purposes,” they said.

The residents are, therefore, calling on the security agencies to provide them with the needed security. 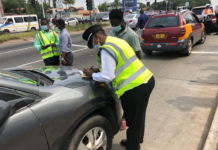