There is tension brewing among members of the New Patriotic Party (NPP) in Sehwi Akontombra over the appointment of District Chief Executive (DCE).

Party hierarchy, members, the council of elders have threatened to collapse the NPP in the constituency if their DCE, Yawson Amoah is not retained.

Per their checks, some members are lobbying high seats to have the DCE removed and a different person nominated.

The party hierarchy has threatened to pull down all party paraphernalia if the Akufo-Addo-led government does not listen to them.

The constituency chairman, Isaac Ekyea-Addae, and other executives, at a press briefing, explained that Akontombra used to be a world bank for the National Democratic Congress until Mr Amoah’s appointment.

They said Mr Amoah fought a good battle for the NPP to retain their seat in 2017, as well as 2020 elections, by mobilising the grassroots supporters to vote massively for the party.

Mr Ekyea-Addae continued that their fury is stemmed from the fact that the president failed to appoint Member of Parliament, Alex Djornuboah as a Minister, and will not watch for similar fate to happen to their DCE.

Also, the constituency Women’s Organiser, Hajia Assana Seibah, appealed to the president to listen to the cry of the party’s grassroots and appoint someone who can bring togetherness in the party. 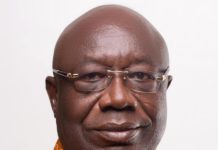