The Asogli State has communicated its preparedness to deploy warriors to help the state securities to protect its territory.

This follows an attack on the State Transport Company Terminal (STC) in Ho, in the early hours of Tuesday allegedly perpetrated by the Western Togoland secession group.

Addressing the media a while ago, the Warlord of the Asogli State, Togbe Lakle Howusu XII condemned the act and called on the security services to ensure the perpetrators are brought to book and dealt with severely.

The Volta Region House of Chiefs have denounced association with the agenda of the groups whom they say have been agitating for independence from Ghana.

Addressing the media at a press conference on Tuesday, the Warlord of the Asogli State, Togbe Lakle Howusu XII called on the security services to ensure the perpetrators are brought to book and dealt with severely.

“The Asogli State Council is ready to deploy the warriors to protect its territories in collaboration with the security service of the nation,” he said.

Togbe Lakle Howusu XII also advised members of the said groups to utilise the decorous channels in articulating their concerns.

Meanwhile, the Information Minister has reacted to the development indicating that an outright deployment of such a force may not be the way to go.

Speaking on Top Story, Kojo Oppong Nkrumah explained that the best approach will be to collaborate with traditional leaders and the National House of Chiefs to arrive at a concrete resolution of the matter. 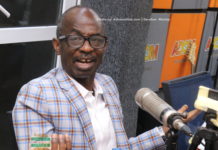 Lekki shooting: Man steals from nurse who treated him for free...