Two female siblings were traumatised after they were attacked and one of them raped at knife-point at Sefwi Boinzan in the Juaboso District.

The victims narrated to Adom News’ Augustine Boah how they retired to bed earlier over heavy rain, only to meet a known intruder identified as Acquah in their room.

The elder victim recounted how the intruder, wielding a knife and cutlass, rushed on them and threatened to murder them if they raise an alarm.

“He ordered us to bow down and tied both our hands behind us and proceeded to undress me. After realising I was in my menses, he moved to my younger sister and took advantage of her,” she recounted.

After the rape, she said the man robbed them of their two mobile phones and purse containing GHC100.00.

The victim added that the suspect, Acquah, is noted for being a robber and serial rapist, yet nothing has happened to him.

He is currently at large and has been declared wanted by the Juaboso Police. 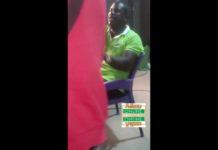