Ghanaian musician, Kurl Songx, says he was on a GH₵90 pay before coming into the limelight in the music industry.
The sensational musician who featured BET award-winning rapper, Sarkodie, on his Jennifer Lomotey hit song revealed he was an elementary teacher before he ventured into music.

See also: I don’t see anything wrong with ‘Jennifer Lomotey’ lyrics – Kurl Songx
He continued that life after Senior High School didn’t favour him hence as a bread winner, he ventured into anything that could fetch him money.
Kurl Songx added that, his mom sold all her belongings just so that he could make it through school and that is the reason he would always put his mom ahead of his dad.
Asked if he knew the Jennifer Lomotey song would dominate the airwaves, the 2016 MTN Hitmaker Winner said “I never taught I would gain that exposure. I knew I would get somewhere but I was much dumbfounded.”
Read this: Sarkodie finally reveals his best rapper in Ghana
The singer commended Sarkodie for increasing the chances of the song to stay on top of the charts.
He told Deloris Frimpong Manso on the Delay Show that not everyone would get that opportunity, adding that it was a privilege to have Sarkodie on the song. 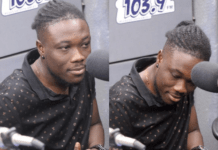