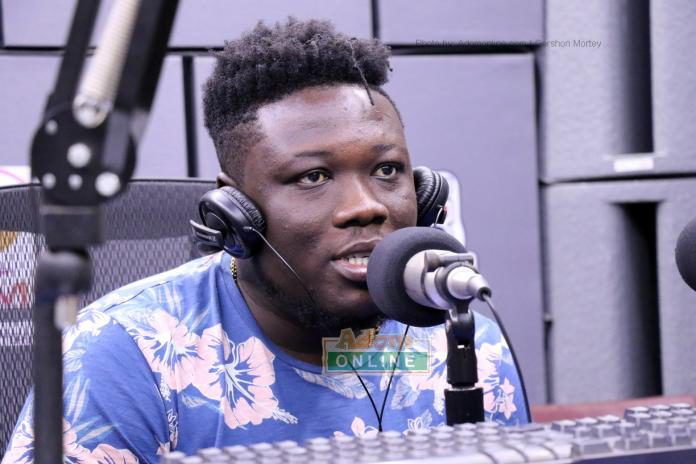 The singer, blessed with outstanding vocal prowess, passed by Daybreak Hitz on Hitz FM Friday and discussed his music career.

He said at certain times his songs do not transcend far as his heart desires, hence he feels his career has been sidelined despite his talent.

Not being able to be at par in the news with acts like Kuami Eugene, Kidi, and Kwesi Arthur, Kurl Songx said got one of his fans rant to the extent of pelting him with water. (Video above)

SEE THIS: I’m not a fan but will ‘play’ with my wife’s backside – Dumelo (Photo)

“Last time
someone poured water on me. They feel like I’ve slept on my career. When I go to
places, they tell me I am sleeping,” he told Andy Dosty.

Asked if he wanted out of the contract signed with Kaywa so he could test the waters with other managers interested in pushing his career beyond the borders, Kurl Songx said no.

“I am not waiting for anyone and neither do I want out of the contract but if someone wants to help and move Kurl Songx from this level to this level, that’s fine but not label to label.

“I feel like my song is not being pushed that much. I am still with Kaywa and at the end of the day whoever comes and wants to help me push then it depends on Kaywa. I don’t do distribution of music. I don’t get my music across. I am just an artiste,” he noted.

ALSO SEE: Why I cut off my manhood – Bobrisky reveals

Kurl Songx was crowned the winner of MTN Hitmaker season 5. He overpowered other finalists, F9, Eugene and Sir Tino to win a GH¢100,000.00 recording deal.

He inked a deal with Kaywa’s Highly Spiritual record after the competition in 2017, and caused traffic with his maiden song, ‘Jennifer Lomotey’ which featured rapper Sarkodie. Kurl also worked with late Rufftown records signee, Ebony Reigns.

Watch video of Kurl Songx narrating the incident above: