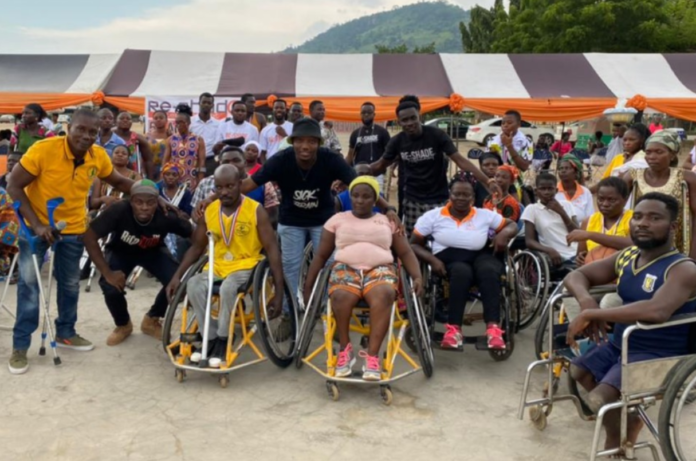 As part of their 7th-anniversary celebration, Re-Shade Entertainment has chipped in the kind gesture of spending the day and giving out mobility aids to disabled people based in Koforidua, Betom in the Eastern Region.

The event day, September 18, also marks the 3rd edition of Party and Fun Games for the Ghana Federation of People with Disabilities in the region.

According to Re-Shade Entertainment, people living with disabilities in the Eastern Region have been anticipating to have the prestigious opportunity to share in the 7th Anniversary celebration – promising this year’s event will top the past ones.

Best New Artiste in the 2019 Eastern Music Awards, ‘O’baya’, whose maiden single ‘S3 Moano’ took the region by storm, has been chosen as the face of event to entertain patrons that will gather to wine and dine in the light of the moment.

In an interview, O’baya disclosed his management decided to use his music royalties to purchase mobility aids and other accessories that will enhance the standard of living for people with disabilities in Ghana, precisely Eastern Region.

However, the previous editions saw O’baya and his team providing free health screening, walking gadgets, skill training and touching motivational speeches among other fun games for persons with disabilities who made it to the event.

This year’s edition has promised to be unmatched as the organisers are geared to put smiles on the faces of all members of the disabled community in the region.

Activities on the D-day will include free medical screening, skills acquisition lessons, and fun games such as wheelchair tennis, playing cards, music and dance competition among others.