We went up against South Africa yesterday in a World Cup qualifying match that should have really ended at least two nil in favour of the South Africans.

The Black Stars were outplayed in every aspect of the game and that wasn’t surprising. In 90 minutes plus injury time, the Black Stars did not have a single shot on target. If that isn’t a major disaster, I don’t know what is!

We went into the match with a ragtag team – players who are not in top tier teams or aren’t playing regularly and therefore not in any shape to feature at this level.

Our players as always were rusty. Jordan Ayew for example, is supposed to be our main striker but he’s not scored any goal in almost two years for the Black Stars. At his club level, Crystal Palace, the statistics are even worse with no more than five goals last season and with the new season ongoing, his tally is yet to really take on some shape and so Crystal Palace aren’t doing very well either in the English premiership.

Andre Ayew, like Asamoah Gyan; who followed the money in China, is playing in Saudi Arabia of all the second-grade places to play football. I could go on and on, but I’m interested in solutions instead of crying over spilt milk.

I’ve seen and read a lot of posts by Ghanaians expressing their frustration over our performance and calling for Coach C. K. Akonnor to be sacked. These calls represent righteous indignation and the anger is justified.

With four matches more to play, the prospects are not too good at all and indeed if we continue with the same lackluster performances the likelihood of qualification will remain a fleeting illusion.

But, and this is a big BUT, we have gotten the same bland results because we haven’t had a proper plan for football or any other sport in 40 years.

Coach C. K. Akonnor was a great player in his day and a nice fellow. As a coach, is he up to the task? And if he’s not, which other Ghanaian coaches can get the job done? I’ll leave that to seasoned pundits like Kwabena Yeboah and Nana Kwaku Agyemang.

However, here’s what needs to be done in the meantime and long term. Akonnor must have a selection criteria where the Coach and Technical Team consider issues such as competitive time played, the amount of times the player has been substituted and or used as a substitute. Passing accuracy, horizontal or backward, aerial competitiveness, and the criteria goes on. Without a selection criteria we will get the same old results – uninspiring under-performers and underachievers

Secondly, there are FA officials who are rumored to be managing some players and or are FIFA agents for those players. These officials in the FA use their influence to get their players in the team because it’s business. The more those players play, the more exposed they would become. That means being noticed by scouts. It means more money in the accounts of these unscrupulous officials. We must be able to ask FA officials with conflicting interests to step aside.

On the part of Government, it has ridiculously set aside $25million dollars for the Senior National Team. And given the FA a target of winning the African Cup of Nations and getting to at least the semifinals of the World Cup. It’s an unrealistic target because the strategy is premised on a wrong foundation and more to the point at the moment we do not have a Ghana Black stars Team.

This isn’t how the Germans won the World Cup. And certainly, wasn’t how the French or Brazilians won it.

What Government ought to be doing is to make available funding to develop the sport from primary school and the GFA should be working earnestly to assist the coach in selecting a fresh crop of players that we can take our time to nurture and develop. The idea of winning trophies should be abandoned for a minimum of three years!

The U-23 team, the Black Meteors is supposed to feed the Senior National Team with players. When was the last time anyone heard anything positive of the U-23 team? I mean do they still exist? Who is the Coach? When is their next fixture? Does anybody know? Or should I turn up the volume?

The more politicians who’ve never kicked a ball or know the difference between off-side and onside dictate to the FA what ought to be done, the less successful the national teams will be in tournaments.

This NPP Government and a future NDC government must all keep their hands off our sports. Get competent people to manage these technical areas and give us gold medals.

Government should not only devote funds to football but promote all other sports. We have moved from a nation that won gold medals at the Olympics in the 60s to a nation that only manages to get one bronze medal. How disgraceful! You cannot invest $25million dollars to Black stars and tell all other sports to go hang and expect better results.

We can resuscitate our past glories. We can get back to winning ways, but it takes the right managers, right strategy, resources and a vision to get us there.

The author, Ras Mubarak, is a former Member of Parliament for Kumbungu Constituency.

Not all leaves are created equal – Ras Mubarak writes on Cannabis 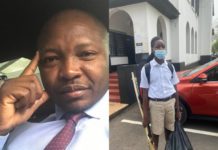