A viral video has captured a trotro driver’s mate in a fierce fight with passengers onboard the vehicle.

The mate was seen forcefully pulling down two women from a sprinter bus in traffic and engaged one in a fistfight.

In the spur of the moment, he landed a slap on another woman who attempted to hold him from the back.

The fight resulted in a heated argument among all the passengers onboard who begun to move out of the vehicle.

“I don’t like what you are doing,” were the words of the mate amid the fight.

The women resorted to throwing objects to fight back, but the mate overpowered them and it took the intervention of three men to resolve the matter. 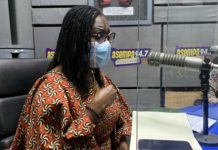 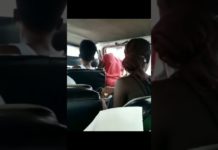 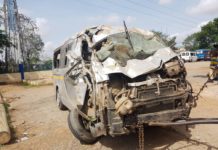 ‘Trotro’ somersaults on knocking down robbers at Sowutuom