Prof Yaw Gyampo is of the view that the Akufo-Addo-led government has been able to garner former President Jerry John Rawlings’ support.

In the eyes of the senior political science lecturer at the University of Ghana, President Akufo-Addo is a master politician who is able to keep his opponents close by.

“As a master politician if you are able to identify your opponent and find ways and means of keeping your opponent at bay, they will find it difficult to oppose you in public; and will censure you in secret.

“It is possible that Nana Akufo-Addo is doing that and that is why Rawlings is almost literally in bed with him,” he said on Accra-based Okay FM.

He stressed most of Mr Rawlings’ comments tend to favour the Akufo-Addo government more than the opposition National Democratic Congress (NDC).

“Though he is the founder of the party, he is now in bed with Akufo-Addo than the NDC and whatever he does will hurt or promote either party so his role is critical but if you observe closely, his comments favour the NPP more,” he added.

However, he noted the NDC must go the extra mile to either get Mr Rawlings on its side or get him to comment less on national issues that may favour the opponent. 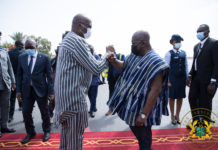