Popular songstress, Mzbel, has revealed sacrifices she made for the opposition National Democratic Congress (NDC).

The singer, in an interview with Citi TV, disclosed she had to sacrifice communications with her father to protect her interest in the party.

I did not know my dad is NPP; I was sending broadcast about JM and his achievements and what NPP is not doing. Then one day my dad told me don’t send those stupid things to me. So I thought he didn’t know Whatsapp so I said then I’ll have to block you and he agreed. I also blocked him because I was so upset.

After ‘ditching’ her biological father for NDC, Mzbel revealed she found a dad in John Dramani Mahama who gave her the platform to have meaningful conversations.

Additionally, she explained her love for NDC is by virtue of the community she comes from, (Jamestown), which sees NDC as a lodge every member must pay allegiance to.

To her, the only language and religion she believes in is NDC, though she had suffered for her affiliation with the party. 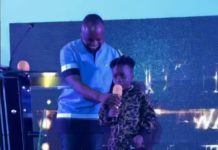