The Ghana Police Service on Tuesday, November 2, 2021, held a remembrance service in honour of personnel who lost their lives in the line of duty to the country.

The solemn ceremony, witnessed by the Interior Minister, Ambrose Dery, family members of the officers and the service personnel, was held at the National Police Training School at Tesano in Accra.

The Chairman of the Police Council, Vice President Dr Mahamudu Bawumia, was also in attendance and lighted the perpetual flame for the commencement of the ceremony.

Dr Bawumia signed a memorial book for the departed souls.

At the call for remembrance, DCOP Rev Fr George Arthur said the event is a reflection of efforts to be put in place to ensure that the sad incident doesn’t reoccur.

The affected officers died in several circumstances, in­cluding during an exchange of fire with armed robbers, motor accidents, and stabbing.

In all, 11 police officers suffered this fate. 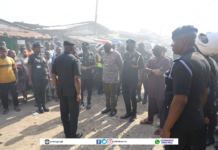 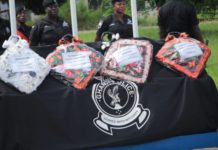