Chairman of the National Peace Council, Most Rev. Prof. Emmanuel Asante, has called on the Minister for Special Development Initiatives, Mavis Hawa Koomson to resign.

This follows the Minister’s admission on Monday that she fired gunshots at a voter registration centre in the Awutu-Senya East Constituency in the Central region.

Madam Koomson, who is also the Member of Parliament for Awutu-Senya East, said she took the firearm – which she refused to identify – to the registration centre to protect herself.

Rev Asante, speaking in an interview on Accra-based radio station, explained it was important for the President to take a keen interest in the issue.

“If she doesn’t do that, the President must terminate her appointment. As far as I am concerned, there is no justification for what she did, especially as a lawmaker breaking the law,” he said.

He stressed Parliament must pursue the matter to the end, adding that her action had brought the House’s name into disrepute. 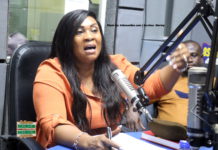