Prophet Prince Elisha Osei Kofi, Founder and Leader of the Power Embassy Church prophesied to filmmaker, actor and singer Kobi Rana that some people were after his life in 2019.

The pastor made it clear that he was betrayed by one of his trusted friends when he made the decision to produce a Freedom and Justice movie which had the tendencies to expose politicians.

The most-watched event is the Anas event but this one will break Anas’ record times 500 but one of your crew members has betrayed you, Prophet Elisha said.

Per adventure, you cannot shoot the movie. You have all the facts but you can’t shoot the movie because someone has gone to tell a politician in this country that you are going to shoot a movie about them.

Meanwhile, the Ghana Tourism Authority says it stopped the premiere of the Freedom and Justice movie across the country because of the fear of it helping in the spread of COVID-19.

There were reports that the movie has been banned with security operatives locking down the various cinemas.

But a statement from the Ghana Tourism Authority said it was just implementing directives from the President and that it does not have anything against the movie and its content. 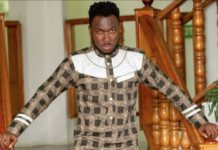