The 8th Parliament has been left in utter shock by the sudden demise of National Security Coordinator, Joshua Kyeremeh.

During a sitting in the House, the legislators expressed grief over the passing of one of the nation’s finest personalities in the sphere of state security and intelligence.

Paul Apreku Twum-Barima described Mr Kyeremeh as a man of virtue whose actions are worthy of emulation.

According to him, Mr Keyermeh demonstrated a great sense of “selflessness, humility, patience, and sympathy” which led to Ghana’s commendable maintenance of protocol.

He noted that Mr Kyeremeh’s commitment and dedication to duty could never be forgotten or erased from the history of Ghana’s Fourth Republic.

“Mr Kyeremeh was dedicated and committed to the security of Ghana and focussed his efforts towards ensuring that Ghanaians and indeed all persons among the civil society enjoy security as a basic provision within the state,” he said.

Again, Mr Twum-Barima indicated that Mr Kyeremeh contributed greatly to the country’s fight against Covid-19 and in the 2020 general election.

These contributions, according to Mr Twum-Barima, led to Ghana being ranked as 7th in the fight against the coronavirus pandemic.

“Through his leadership and cooperation with the Bank of Ghana, several loopholes in the export of gold were blocked. By 2017, Ghana was able to increase export revenue from $5.1 billion dollars in 2016 to $5.9 billion dollars, a 13% increase,” he added.

Under his tenure, Mr Kyeremeh spearheaded the creation of
National Integrated Maritime Strategy to protect the country’s
maritime space.

He also spearheaded the formation of the National Border Security Strategy for Ghana to ensure maximum security along its borders and initiated a Cyber Risk Assessment strategy for the country.

Mr Twum-Barima told the House that he can testify to the fact that even at the peril of his life, Mr Kyeremeh’s devotion to duty exceeded all other things.

“Mr Kyeremeh assumed a special responsibility towards the general peace and stability of the country. He, therefore, put the security of the country first above everything else including his own life.

“Mr Kyeremeh’s commitment and dedication to the security of the state was exhibited all through his career trajectory,” he added.

The legislator expressed his deepest condolence to the family of the bereaved on behalf of the House, the New Patriotic Party (NPP) and all Ghanaians.

“Indeed Ghana, NPP, and his entire family have lost a gem and excellent leader.”

Mr Kyeremeh served for over 22 years in the security intelligence space. He assumed the role of Director of the Bureau of National Investigations, now known as National Intelligence Bureau from 2005 to 2009, after serving command levels in the Northern, Upper East, Ashanti, and Greater Accra Regions.

In 2017, Mr Kyeremeh was appointed as the National Security Coordinator by President Nana Akufo-Addo.

A position he held until his demise on Monday, January 18.

According to sources, Mr Kyeremeh died of kidney complications at the Ga East Municipal Hospital, where he was allegedly being treated for Covid-19. 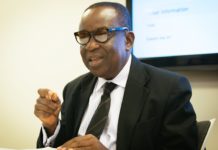 Kan-Dapaah, Agyeman-Manu up for vetting Wednesday

Covid-19: Speaker shoots down calls for closure of Parliament