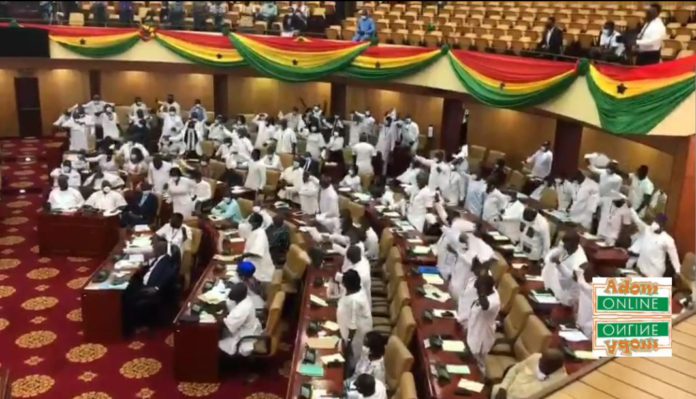 Parliament has approved an amount of ¢1.4 billion for the Ghana Education Trust Fund (GETFund).

According to a report from the House sighted by JoyNews‘ Joseph Opoku Gakpo, GETFund is expected to spend ¢866 million, representing 60% of the total amount to pay back its debt.

From the report, an amount of ¢30.2 million is going to Members of Parliament for emergency projects and monitoring.

Also, about ¢13 million of the approved amount will be used to cover expenses for a special purpose vehicle, ‘Daakye’. ‘Daakye’ is expected to help GETFund raise ¢1.3 billion on the bond market.

Reacting to the expenses, Minority Leader, Haruna Iddrisu, who was unhappy with the allocation of the fund approved, stated that Daakye is a plan to “loot and share” state resources.

Mr Iddrisu said that “ the Ministry of Finance is creating a structure called Daakye to siphon money, this must stop. You don’t need a Daakye to loan money for GETFund. This is not acceptable.

Also speaking on the Floor of Parliament, Minority Spokesperson on Finance, Cassiel Ato Forson, expressed his displeasure at GETFund’s use of the approved money to pay off debts.

He stated that the GETFund policy is to use approved funds to improve education, infrastructure among others in the country.

“Today, the GETfund is collapsing. We cannot continue allowing the Ghana Education Trust Fund to use the amount they are supposed to use to improve our education for the purposes of paying a debt; that is not what the policy said,” Mr Forson added.