Businessman, Dr Papa Kwesi Nnduom, has broken his silence on a suit against him by a United States-based company over $63m alleged money laundering and wire fraud.

The company, Equity Fund and Securities Investment, in the suit, alleged that Groupe Nduom engaged in many illegalities.

This, they said, was for the “sole personal financial benefit of the Nduom family”, and used his businesses as a conduit to “facilitate the unlawful acts.”

The writ noted the plaintiff’s assignors “are victims of defendants’ fraudulent, avaricious and criminal conduct perpetrated on more than a million unsuspecting depositors who have lost their life savings because of defendants’ unlawful acts.”

“The Nduom family defendants, by and through their ownership, control and use of defendants GN Bank, Gold Coast Fund Management and over 60 undercapitalised interrelated companies, collected several million dollars of depositor’s saving, investment contributions and insurance premiums, and in violation of U.S. and Ghana laws.

However, Dr Nduom, in response, has fought off the claims and described the allegations as a mere political smear.

He argued the plaintiff has no direct business with him or the other defendants, and therefore does not have a case.

“His motion is brought by more than a dozen US Defendants named in the complaint but who have never met, spoken to, or be involved in any transaction with either Assignor. This includes Dr Nduom and his immediate family; GN-IL, a Chicago bank in which Dr Nduom invested, as well as GN-IL’s outside directors and CEO, and three other companies owned in part by members of the Nduom family. 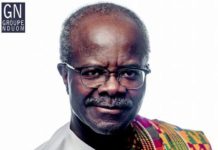 I am sorry – Nduom apologises to affected customers of Gold Coast, GN Savings and Loans