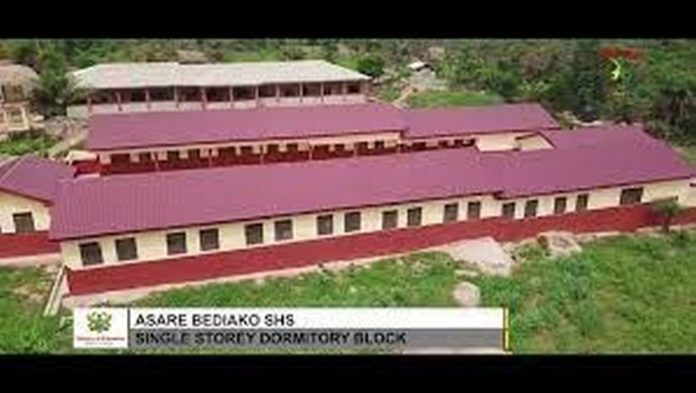 Over 300 female students of Asare Bediako Senior High School (ABSEC) at Akrokerri in the Adansi West District of Ashanti Region risk eviction from a rented apartment serving as a dormitory for them.

According to the headmaster of the school, Dr Emmanuel Asiedu, the two landlords, who rented their houses out to be used as girls’ dormitory, have served the school an eviction notice over their unpaid rent allowance.

ABSEC, which has a student population of over 1,700, has no boarding facility to house the 3,009 girls on campus in decent accommodation, a situation the school authority describes as unfortunate.

The school stands tall among the three Senior High Schools (SHS) in the Adansi West district in all academic competitions despite facing classroom and accommodation challenges.

Unlike the boys’ dormitory located on campus, the girls live outside the school compound at a distance. Like other schools in the region, there’s nothing good one could share about the school’s dining hall and sanitary facilities for students and teachers.

In 2020, the girls were saved with a contribution of Ghc12, 000 by the Adansi West District Assembly while the Member of Parliament for the Fomena Constituency also supported the school with Ghc7,000 to cover a year’s rent advance renewal for the 2020-2021 academic year.

Currently, the school’s girls dormitory rent advance has expired with no money available for renewal for the girls.

The school explains that they used to pay the girls’ dormitory rent in advance with house dues but since the free education was introduced across the country, the education ministry has not been consistent with house dues payment making it impossible for the school to raise the rent money independently.

A teacher, who spoke on condition of anonymity, said management of the school may ask the girls to go home if the landlords continue to pressure them to pay the money.

The headmaster of the school, Dr Asiedu confirmed the development.

According to him, official communication has been directed to the office of the Member of Parliament for the Formena Constituency who doubles as second Deputy Speaker of Parliament, Andrew Amoako Asiamah and the Adansi West District Assembly for immediate assistance.

Mr Asiamah, who is aware of the situation in the school, said efforts are underway to address the accommodation deficit in the school.

He said, he has personally spoken to the Education Minister for special attention to be given to the school by the government.