Former journalist and now Minister for Information, Kojo Oppong-Nkrumah, has clarified that he never set out to embarrass GHOne’s presenter, Serwaa Amihere during their interview session.

According to Mr Oppong-Nkrumah, he only sought clarification about the question posed to him by the presenter and not to take advantage of her alleged ignorance to embarrass her as widely propagated.

“I didn’t intend to be a difficult guest for Serwaa Amihere, I just needed clarification on the question posed to me by her, but I think it did not come out well,” he said.

Speaking in an interview monitored by ABC News on Monday, Mr Oppong-Nkrumah admonished journalists not to think that by virtue of their positions their questions cannot be questioned.

“I think a lot of journalists don’t think their questions can be questioned but its legitimate for your questions to be questioned, and there is nothing wrong with it because it’s a conversation,” he added.

The Minister further noted that he spoke with the presenter after the interview to encourage her, expressing optimism that the presenter will chalk more successes in the future should she continue with the commitment she uses in her line of work.

“This is something time and history will not remember, and she will do very well as the years go by,” he intimated. 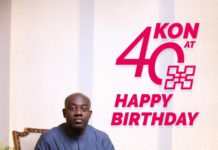